LORRAINE ELY trained at Trinity College of Music, London (DipTCL), with Wendy Eathorne and Geoffrey Pratley. After leaving college she continued her vocal studies with mezzo Elizabeth Stokes and currently has lessons with John Upperton. Her career has covered repertoire from Bellini to Gilbert & Sullivan, music theatre and straight plays. 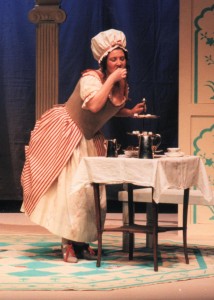 Oratorio engagements have included Handel’s Messiah, Mozart’s Requiem and Haydn’s Creation, as well as singing the Vivaldi Gloria for the Mark Morris Dance Group at Sadler’s Wells. Professional Christmas seasons have included the flamboyantly eccentric Gypsy Brazil in David Wood’s Nutcracker Sweet  for Brentwood Theatre Company, Queen Rat (Dick Whittington) at Bishop’s Stortford, and the Thursford Christmas Spectacular in Norfolk. Lorraine has also appeared in ‘A Song for Life’, a concert produced by Mario Frangoulis, at the Theatre Royal, Drury Lane, as Rafaela in Elegies for Angels, Punks and Raging Queens (Brentwood and West End), and sang in the UK première, and on the subsequent recording, of Maury Yeston’s Nine at the Royal Festival Hall, alongside Jonathan Pryce.

From 2005 to 2009, Lorraine was the regular soprano with Essex-based quartet Country House Opera, performing concerts of operatic highlights in a variety of venues across the county, and since leaving college has also been a member of London-based company Sounds Lyrical. Recent appearances have included Mistress Quickly (The Merry Wives of Windsor, 2009) and Paulina (The Winter’s Tale, 2010) with Mac Theatre, several roles in Puccini’s Il Tabarro and Suor Angelica (October 2009), and a Bridesmaid and Ännchen cover (Der Freischütz, April 2010) for Midsummer Opera.

Other engagements in 2010 included ‘3 Sopranos in A Night at the Opera’ and the soprano solo in Beethoven 9, both in July, Marcellina (Figaro) for Opera Nova (September), Tebaldo cover for Midsummer Opera’s Don Carlo (November), and soprano soloist in Mahler’s Symphony no.2 with Philharmonia Britannica (December). 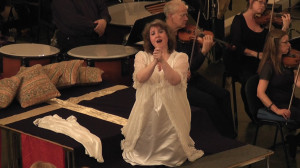 In September 2011 Lorraine returned to the Kenneth More Theatre revisiting the musical Nine, this time playing the role of Guido’s Mother, and followed this, in February 2012, with playing Mother Abbess in The Sound of Music. Also in 2012, she ‘had another go’ at Paulina (The Winter’s Tale) for Romford Summer Theatre and, in November, sang Marzelline in Midsummer Opera’s semi-staged production of Fidelio.

Further opera roles have included Verdi’s Desdemona (Otello) and Donna Elvira (Don Giovanni) for Midsummer Opera and the dual roles of Micaëla/Frasquita in a 5-hander version of Carmen for New London Opera Players. Returning to the outdoors, Lorraine won ‘Best Performance in a Minor Role’ for Holofernes (Love’s Labours Lost) and had an ‘interesting’ time playing Leonata in Much Ado About Nothing – on crutches and with a surgical boot (….long story!) both for Romford Summer Theatre.

Meanwhile Lorraine continues with her solo entertaining and classical recitals, with more Shakespeare in 2018.