Dick Whittington, House on the Sea Productions at the Rhodes Centre, Bishops Stortford

“Lorraine Ely has some dramatic moments as Queen Rat”   (The Stage) 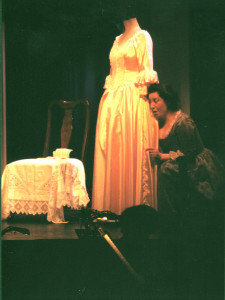 The Marriage of Figaro, Aquarian Opera at the Barn Theatre, Oxted

The Magic Flute, Aquarian Opera at the Barn Theatre, Oxted 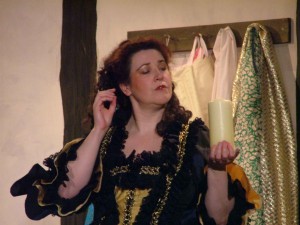 “This was a very fine performance indeed by Mrs Betterton, the clock-face acting lesson being superb but with an excellent one-sided dialogue with her husband in the second Act and a memorable Lady Macbeth extract towards the end, as she acknowledges her eccentricity…. It seems a shame to mention any particular scenes in despatches since every one was delivered and timed to perfection.”   (NODA)

“I must congratulate you on your perfect performance of “The Sound of Music”.  It was absolutely brill….  So fantastic.  Keep us posted on next one!!”

Extracts from “Two”, Theatre at Baddow

“This wonderfully adapted series of extracts is a two-hander, with Lorraine Ely and Bob Ryall playing all the parts in the pub within which all the action takes place. The variety of accents, temperaments and types of character played as the short scenes unfolded were testimony to both actors’ skill. There was great humour during the bar scenes as the actors bickered while serving drinks to imaginary customers, a humour that was maintained as Ryall was transformed into a somewhat drunken and leering rogue but who was ultimately controlled by his quick-witted Liverpudlian girlfriend, played by Ely. The power shifted from Ely to Ryall as Ryall became a self-absorbed and jealous bully browbeating his wife, Ely, into quiet submission. The contrast between these and the previous characters was strong and began to shed light on the fragility of relationships between couples who are supposed to love one another. The scene where Ryall played a little boy who had lost his father displayed a tender side to Ely’s character as landlady and was the catalyst for an ingenious plot inversion in which we discover that Ryall and Ely had lost their own son seven years ago, in a car crash. The torrent of emotion, particularly the anguished cry from Ely that gushed like a dam bursting was genuinely touching. But both actors were totally convincing as the burden of seven years grief, guilt and mutual suspicion began to unfold. I doubt I was the only one with a lump in the throat and reaching for the handkerchief. This was a moving start to the evening that I couldn’t fault.”   (NODA – Reviewer: Stewart Adkins)

“I was amongst the audience at the WI Centre at Hatfield Peverel this afternoon [June 2013] and both I and our president enjoyed your singing very much.

We are holding our Christmas meeting on the afternoon 4th December 2013 and would like to book your services if by any chance you are available.”

FROM THE REPORT OF THE CHRISTMAS MEETING IN THE ‘BRENTWOOD GAZETTE’:

“Entertainment was provided by Lorraine Ely – a singer who was a joy to listen to with a wonderful voice and personality to match. She charmed members with songs from the shows, seasonal songs which they all knew, and encouraged the audience to participate. She was amazing, rounding off her performance with carols and other Christmas tunes. Her pièce-de- resistance had to be ‘The Lonely Goatherd’ from The Sound of Music – best entertainment in years.”

“We were wondering if you had a free Friday in February to come and visit us for an hour again. Can you let me know if you can.  Hope you can, you are their favourite.”

“We would like to book an afternoon with you, the week before Easter. You have been to us before & our Clients still talk about you.”